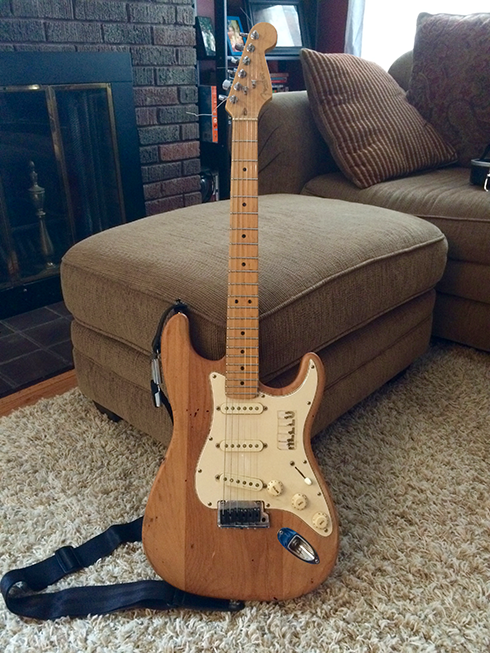 I use this guitar a lot. If you’ve ever seen me playing on stage, it’s most likely this guitar. And there’s a couple really good reasons for that. It sounds and feels great. And it’s one of the last projects my dad and I did together.

This is a story about my dad, who passed away on this day seven years ago.

It was beat to hell. Horribly abused by it’s former owner. I was told some pretty impressive tales of the torture and beatings this guitar took onstage and off by a metalhead who apparently went to “The Who” school of performance, regularly tossing, smashing, and burning the guitar during songs and the breaks between them. The black finish was nearly gone, deep gouages covered all sides of the body. The neck looked like it had been drilled with power tools, and most likely it had.

There was some odd EMG pickup stuffed into the bridge slot, but the electronics were never finished. It wasn’t actually connected to anything. I wish I had some photos of that, but didn’t think of it at the time.

I don’t recall where I got the neck from exactly, but I found it for less that $25 at another guitar shop. It was in better condition than the one that was on the guitar. I checked the serial number on it, and strangely enough it was also from a 1997 Strat. I like to think there’s some metal head out there, just destroying that model year strats and selling off chunks of his guitars when he’s through with them.

Being a Clapton fan, I figured I’d make the best guitar out of the parts I had. (Just in case you’re unfamiliar with that reference, click here.) I stripped out the electronics and the bridge and took the old neck off and… well, got busy with something else. So, everything went in a box.

Why don’t you bring it over here?

I don’t remember if Dad was just finishing a round of chemo, or if he was in remission, but I remember him having some free time on his hands. He asked how my little guitar project was going.

Me: Slowly. It’s all in a box in the corner right now.

Dad: Well, what do you want to do with it?

Me: Everything. That guitar has potential.

Dad: It doesn’t have anything if it’s sitting in a box. Why don’t you bring it over here? Use my tools. Maybe I can help.

A week or two went by. I started stripping the paint off it, but didn’t get very far. He calls me for something else, but eventually the conversation steers to the box of guitar parts.

Dad: You still have that guitar in parts?

Dad: Bring it when you stop by.

So I brought it by.

Dad: You sure you want to put this thing together?

Dad: Do you want the rest of the finish off it? You’re going to paint it, right?

Me: Well, I thought about leaving it as bare wood.

Dad gave a puzzled look, because I had just dropped a pile of junk on his workbench, then accepted my answer. I left the guitar (such as it was) there, expecting to come back the next week and start work.

Dad: Well, except for the electronics part. I’m not so good with soldering.

Dad: What pickups does Clapton use?

Me: I think he’s got some Vintage Noiseless on his signature models now.

Dad: You should get some of those. Toss these in the trash. That one doesn’t look like it ever worked, and these other ones look like they’d be too hot.

Clapton was our musical common ground. B. B. King too. He didn’t know much about my other guitar hero’s, but he knew those guys. Sometimes he’d record concerts or PBS specials on VHS for me if he knew they’d be on. He probably figured that if those were the pickups that Clapton used, they must be good, and I should use them too.

I finished off the electronics a week later, strung it up, and took it back over to his house for inspection.

Dad: Don’t. It sounds good. Looks good too. Don’t mess with it.

Updated 02/11/16 - I fixed the huge image file size, sorry about that. Also, grammar has been fixed in places.